I recently had a chance to look at Matthias Oostrik's method of converting the 2D texture to particles, and Apple's "Snow" OpenCL example in depth.

I looked at my "go-to" fluid simulation, and re-jiggered it to use some elements of those to generate particles from the textures I've generated. I'm not using any Optical Flow or Density type calcs from Oostrik's code, since that's already handled by my go-to fluid sim, but mainly the init code/pulse/index watcher stuff that keeps QC from blowing up!

During part of this it uses an additional CL kernel by Stonewall Ballard that generates "force" from the input color of the color seed. During the second part, I'm triggering a straight ahead X gravity force.

The pic below is of the same programming, more or less... OK, more. There's a graphic that is a lit fluid sim with high quality normals, a bokeh blur type effect, and a few less particles (incidental) pictured below. With the film clip, it was easier to see all of the particles without the lit fluid backing. 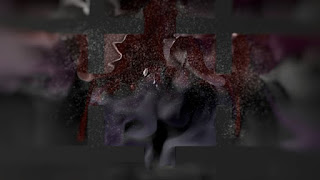 This is a live screencap with Syphon. For some reason, Syphon is interfering with QC's Mesh Creator texturing it's points properly, so you're seeing little squares instead of gaussian textured points. Oh well! This wouldn't normally be an issue.