All The Night Long


All The Night Long from George Toledo on Vimeo.

With this, I wanted to write a song that was sort of in the style of the BeachBoys / 60's melodic pop, with this particular beat that hits snare on the 1, 2, 3 and 4 that was used a bit in Motown songs... I'd had this in the back of my mind for a long time! I'd kind of had this song hanging around for awhile, but kept hesitating, because I didn't want to "deal with" recording it and engineering it to sound the way I was imagining it.

I decided to see what I could do with *just* my laptop, and nothing else, forgetting about my idealized arrangement.

I recorded the vocal using the built in laptop microphone... which probably contributed to the overt autotune that I used. It wasn't really that my vocals were out of tune, it's that they sounded like they were recorded with a laptop mic. Adding the vocal transformer, tuning, overdrive, and serious eq got it to sit ok in the mix. It's sort of abnormal for me, because vocal tuning isn't my thing, but in this case I ended up wanting a "robot" effect. I'd never used autotune before (on my own recording... plenty when working with others though), so I wanted to have my shot at going crazy with it.

Then, I played some parts using the built in Logic sound engine stuff, and eq'ed and effected it sort of how I thought that era of production would sound, but a little modern/different, given the "talking robot" lead vocal and the fact I'm doing it on a friggin' laptop with the built in mic and musical typing... but I didn't do any proper a/b-ing, I just wanted to crank it out.

I did the visual on the fly using a QuartzComposer program I whipped up, and it's sort of funky, but I wanted it to look spastic...making the visual I'm feeding in stutter, basically. Then, I wanted to "break the 3rd wall" towards the end by turning off what would be assumed to be a normal video, and showing that it was a hand held taking a picture of a computer screen. Again, super-dashed off... more of a fun experiment in what I could do in a short time than anything else.

The whole percussion layer that comes in at the chorus repeat that's around 2 minutes in is pretty influenced by Quincy Jones's Soul Bossa Nova, and this old "Wide World of Sports" percussion thing that used to be on a TV commercial back in the 80's. The little keyboard melody thing at the end is sort of a nod at New Order. 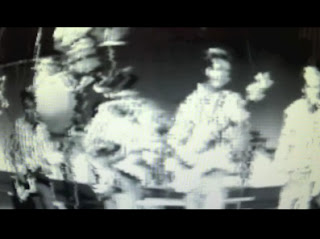