Some of the Apps that still may be available in the dl box, were made on Leopard 10.5 and used certain kinds of techniques that relied on what's called "window focus" to make them work correctly. The way this worked was changed (or broken, depending on how one looks at it) in Snow Leopard, 10.6.

I'm not 100% sure how many apps that has impacted, but be aware that any apps that seem to do "weird stuff" on your system and happen to be from around the time of Leopard (10.5), may be subtly or really obviously broken. Most of these revolved around using features that would "follow the mouse"; mouse position was forwarded to the app. Others revolved around window levels that have problems intercepting events in Snow Leopard. 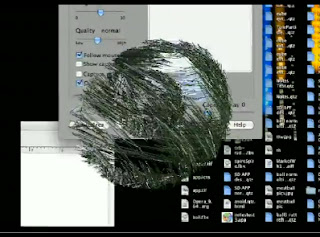 If any older apps seem to act strangely, please let me know. None of them should present any problems for your OS, they will just look, play oddly, or seem to have no interactivity. This shouldn't impact any apps or programming that have been featured here for some time.