Cubed from George Toledo on Vimeo.

This is a piece I put together recently. I'll give brief rundown; excuse me if anything sounds "high falutin'".

I wanted to write a piece in a type of rondeau form where the melodies would recapitulate, but over very different grooves, with some interesting transitions. The segments go something like "quiet storm r&b", to a kind of "I Can't Go For That" Hall and Oates thing, to "cat and mouse" 007 deal, to the end part, which in my mind was influenced by the Peter Gabriel album with his face melting off on the cover (Peter Gabriel III).

The idea with the visual was to be kind of dark, and highly geometric. I wanted to infer "virtual windows" and cubes where something is happening "in the window", and then have the window move position with the same movement happening. I wanted to pop shapes around and have borders from one side line up where the past border was; that kind of thing. I wanted to use sparseness to density of lines, line weight, and line brightness to interact with the music, and have hard cuts, rotations, and some line chases that were also very driven by the music. 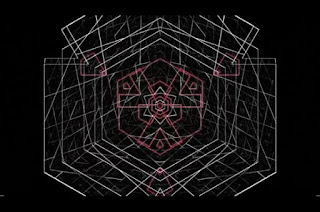