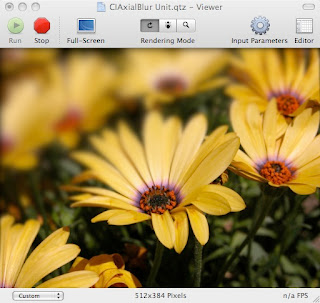 One great trick for adding depth is to have certain areas of a picture blurred while another area appears to be in focus. By being able to control what areas of an image are blurred, one can infer visual impressions that differ from the source imagery greatly.
In the example above I've selectively chosen to heavily blur the flowers above the main flower in the center of the image and have placed more weight to the left side than the right.
The great thing about an effect like this is that it simulates how we actually see, though I've amped up the effect a little bit more than I typically would in a real world scenario, to make it more obvious for the sake of demonstration.
In many ways, selectively blurring specific areas emulates the effect of our peripheral vision; the part of an image that is outside the focus of our gaze.
I'm including fully implemented image unit versions of CI Axial Blur, as well as CI Axial Motion blur in my Box account widget on the sidebar.
An interesting application of CI Axial Motion Blur is to blur a specific area in a picture, to make it look like it's going faster than it appears unfiltered. So, if you had a picture, you could take an object in the area that is the center of attention and blur it to make it appear as if it is moving by imitating the natural inability of the eye to catch every bit of detail in a fast moving object, unless the eye is actively following it. By doing the inverse, we would imitate the effect of the eye following the object of interest. Tthe background would be motion blurred to infer movement of either the background, or the eye.