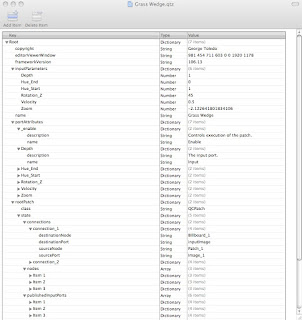 The .qtz files that the Quartz Composer Developer Application opens up can also be thought of as .plists, that when opened with the QC application, enable us the ability to easily edit via a node based environment, and instantly view the output, in realtime.

The above is an image of a qtz when dropped into Property List Editor, which is in the Developer/Application/Utilities folder.

Rarely does it make more sense to actually edit or program a qtz with plist editor than it does to edit it in QC, but it does provide some small insights about organization of the file, the order of evaluation, and other info; some quirks as well.

This technique can also can allow one to build a macro into the very top level of a qtz, which can occasionally be interesting, as that qtz will drag onto other qtz enveloped in whatever that macro environment was. So, if you change the rootPatch from QCPatch, to QCCamera, or QCIterator, the root would now be operating in that environment instead of the default QCPatch root level.

Protocol qtz's reveal interesting quirks in organization, and patch names occasionally deviate from "QC" naming conventions, such as the 3D transform being called the QCCamera environment, to name one. Manually renaming allows one to shift macro environments without rewiring everything, in some straightforward cases, like shifting from a standard QCPatch macro to QCCamera, QCProjection, or QCIterator, to name some.