Vimeo put this vid up on their staff picks a couple of days ago. I was happy with the way it turned out, so it was nice to see them do that.

The visual was put together in Quartz Composer, using some different methods of image generation, and tons of creative filtering. The render is a Quartz Crystal render, though I did render to png in High quality, and then run through a separate H264 pass using MPEG Streamclip (to make the movie easier to view for people with slower internet connections), after joining the audio back to the movie render using Quicktime Pro. 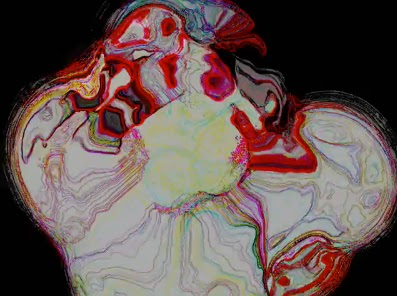 I made the music using Garage Band and mixed with Logic, and it's loop driven stuff. It was a rare case of having a visual, and wanting to fit some music to it, instead of the other way around.

As far as the choice of Garage Band goes, it's not for lack of having other stuff (I have Logic, ProTools, Cubase, Acid, Digital Performer, Samplitude, some Roland recorders, Tascam stuff, and an MCI reel to reel, but Garage Band is fun for quick stuff, especially on the run... if I'm working with loops, I actually prefer it to Logic for the arrangement part. I think Garage Band is a particularly well done program).

This was put together in 10.5. It makes some heavy use Kineme Audio Tools and GL Tools, and the v002 Optical Flow, and some other slight of hand!