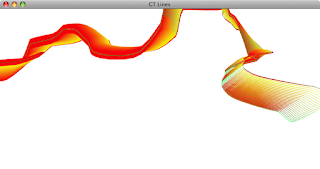 I like those zingy lines that are used so much in advertisement art, and I've had it in the back of my mind that I would experiment with line groups, and a kind of animated line art where the apparent camera follows the line group. I haven't been able to get to experimenting with this for a bit, but a question that was posted on the Quartz Composer Developer mailing list has kept the concept towards the front of my mind.
I'm uploading a pretty alpha application that I haven't spent much time with, that can make groups of interactive animated GL lines in real time. When it opens, it will be on an auto horizontal scroll. Experiment with horizontal and vertical two finger scrolling, especially in the auto scroll off mode, and you can get your lines to move around or rotate.
This uses the Kineme GL Tools plug-in to render the structures, and I used Quartz Builder to "app-ify" it, after programming the qtz in Quartz Composer.
I've worked well past what is shown by this app, I'm just reflecting on exactly how I want to implement some of the extra functions I have going. In my more developed unreleased version, I've setup some stuff to make it look more organic and like an actual camera environment, with a feeling of focal distortion and peripheral blur, and ability to back up the relative camera distance and coordinates, and some audio and motion interplay.
It's working well, but I'm contemplating if and how I want to implement a few of the control methods, especially whether or not I want to hook up some artnet and osc control or keep it simpl(er). Adjusting for x/y when I adjust Field of View and dynamically rotate the scene and translations has been the cool part. I'm just undecided if I want to make the x/y point automatically adjust when I change my view point, or what exactly makes most sense. I'm leaning towards preset modes.
Today, I told myself I would work on a video for some music I have recorded using a mostly non-QC image tricks, but ended up starting on this in the morning and got totally side-tracked. After spending this much time on it, I feel like I might as well change my video plan, and use this for a major part instead!